It will succeed the A6 and A6 Avant with combustion engines, but in the meantime, Audi is bringing the luxury station wagon with an electric motor in 2024. We’ve already had a look at the corresponding A6 E-Tron Avant concept car.

The A6 as heir to the Audi 100 is like a classic from Ingolstadt – a bestseller by a good margin, which has made a significant contribution to the premium VW brand’s profits for years. In this regard, the future of the A6 is particularly important. The last new Audi series with petrol or diesel on board is scheduled to be launched in 2026 and will be an SUV. But the successor to the current generation A6, the C8, is slated to be in 2025, and so it will be again at the start with combustion engines. As early as 2024, the A6 should also be introduced as the E-Tron. Audi calls the A6 E-Tron Concept introduced in 2021 the Sportback, and a true four-door is likely to follow, especially for the Chinese market. In 2024, Audi also wants to release the Avant in addition to the Sportback, which looks more like a notch. The Ingolstadt-based company has been building Avant models for 45 years – and now comes the first electric-only version. Like the Sportback, the electric station wagon (A6 E-Tron Avant) is available with rear-wheel drive and all-wheel drive. According to Audi, the model offered is 98 percent standard.

Although the A6 E-Tron Avant has a much larger trunk than the Sportback, the exterior dimensions are identical – 4.96 meters long, 1.96 meters wide and 1.44 meters high. The two chassis variants are also close together when it comes to aerodynamic tuning: while the Sportback glides through the wind with a very good drag coefficient of 0.22, the station wagon has a 0.24.

The A6 Avant’s large single-frame grille is closed, and fresh air required to cool the battery and motors enters the vehicle through the hatches under the grille. Powered by OLED technology, the Matrix LED headlights work so accurately that they can project video games or movies on the wall at night, even more than current digital matrix lighting – the brightness is not yet enough for daylight viewing. Side-mounted LED projectors can display individual light signatures on the floor when doors are opened, but also warnings to cyclists, for example, that the door is currently open. 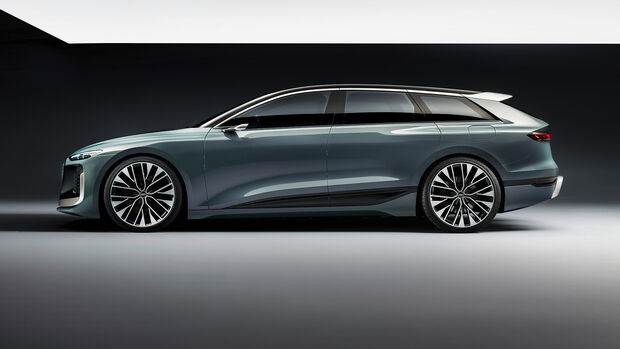 The roof gently lowers back.

The composite roof slopes gently backwards and ends in a spoiler on the roof edge as the air flows in. In the show car, the side roof panels are integrated into the spoiler – all parts are made of aluminum. On a later production car, this equipment could appear in the options menu. Camera exterior mirrors are also optional. If you prefer classic mirrors, you can still get them, especially since camera-based exterior mirrors are not yet approved in countries like the USA. 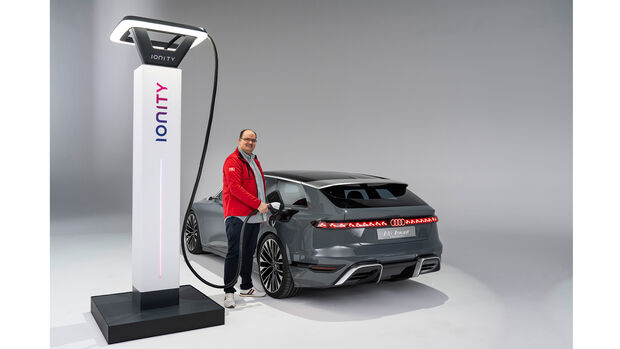 The battery can be charged with an output of up to 270 kW.

The basis of the A6 E-Tron Avant is Audi’s new personal protective equipment platform (PPE: Premium Platform Electric). Audi developed this architecture together with Porsche – it is intended exclusively for purely electric motors. Like most modern electric vehicle platforms, it is designed as a skateboard platform that holds a large battery between the axles. Wheelbase and battery sizes are scalable. The smallest PPE of the future will be the A4 E-Tron, whose name is not yet official and which Audi will introduce after the A6 E-Tron – it could then complete a new A4 combustion expected soon. The Q6 E-Tron (like the Q5 electric car) will be the first Audi PPE to hit the market, shortly before the Porsche Macan, which is technically closely related to the Q6. Q6 / Macan or A4 and A6: the platform is suitable for both SUVs and vehicles with a low profile – Audi is talking about high and flat floor models here. 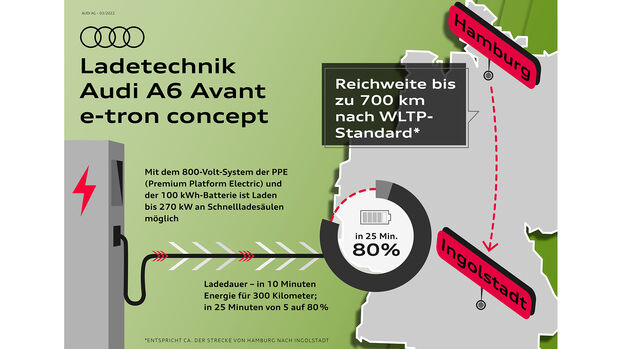 The A6 E-Tron Avant is supposed to travel from Hamburg to Audi’s headquarters in Ingolstadt on a single battery charge.

The new A6 engine with the afterburner engine is based on further development of the existing MLB platform (MLB: Modular Longitudinal Toolkit), with the name also changing with further development. However, Audi has not yet announced the new name. Primarily intended for countries where the electric vehicle infrastructure is not yet well developed, Audi will also introduce the new A6 combustion engine in Germany. 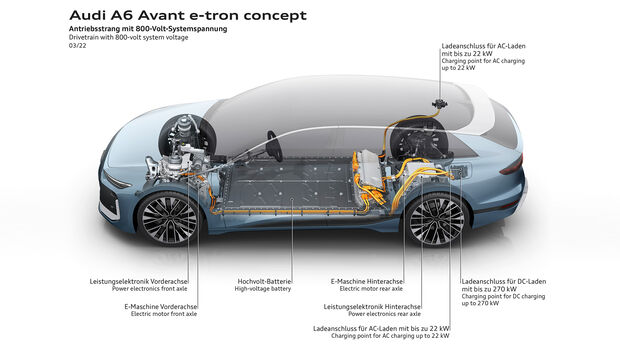 PPE is also a skateboard platform with a large flat battery placed between the axles.

The A6 E-Tron Avant show car now on display is equipped with height-adjustable air suspension. This technology is likely to be part of the higher trim levels – the basic variant will likely be equipped with a steel spring. Audi undertakes a trailer hitch as well as a tailgate (front box). Up front, a five-link axle specially optimized for electric vehicles takes care of wheel control, while a multi-link system operates at the rear. 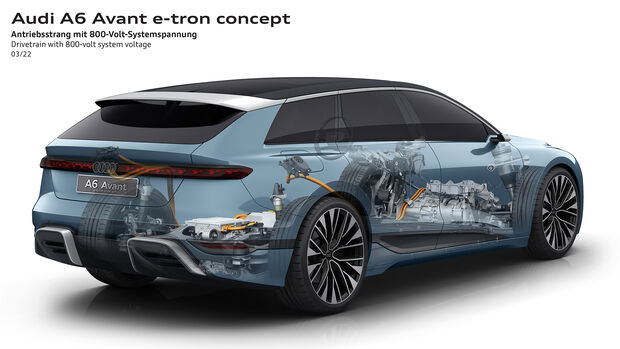 With the A6 E-Tron Avant, the engine on the front and rear axle provides the drive – then the station wagon is on the road with all-wheel drive, or there is only one engine in the rear, which in turn drives the rear axle. The electric A6 will also be available with rear-wheel drive, which so far is unusual for Audi. Equipped with both engines, the system output of the drive train is 350 kW (476 hp) and the system torque is 800 Nm, typical of electric cars, even when stationary. It’s questionable whether Audi will leave it at this already high-performance level in the future RS6 E-Tron Avant, or whether engineers will beef up the engine range. 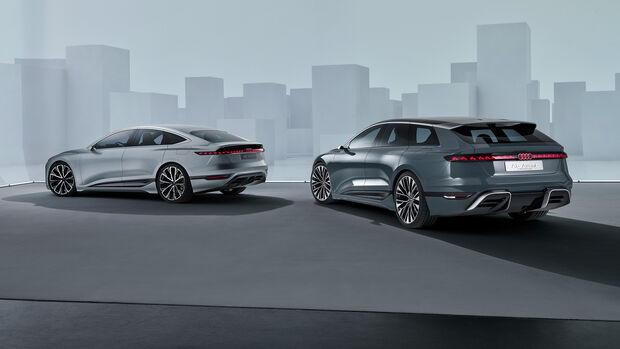 With the Avant (right), Audi sticks to the body shape of the station wagon in the upper middle tier – on the left in the photo is a sedan called the Sportback.

There is not much information about the driving data of the A6 E-Tron Avant. The base variant should sprint to 100 km/h in under seven seconds, and the 350-kW all-wheel drive version should hit the reference speed in less than four seconds.

Perhaps there are different sizes of batteries, but a model with a capacity of 100 kilowatts has already been announced. The station wagon should be able to travel up to 700 kilometers. The battery operates at 800 volts and can withstand a charging capacity of 270 kW – the 100 kWh battery can be charged from five to 80 percent in less than 25 minutes. Ten minutes of charging should be enough for a range of 300 km.

The new Audi A6 E-Tron will be launched in the first quarter of 2024; Audi doesn’t want to say anything about pricing just yet, not even whether they’re higher or lower than the prices of the combustion model. Given the high performance of e-cars, entering the electric Avant world is likely to be more expensive than the cheapest A6 Avant with a combustion engine.

Yes, these are practical and elegant cars at the same time.

No, the popular high-seater SUV has long won.

With the A6 E-Tron Avant, Audi is giving the classic station wagon a chance, even in the dawning era of electric cars. This should please German customers in particular, who have always been among the most loyal buyers of station wagons.

The design of the A6 E-Tron Avant follows the model of the combustion engine world and is very similar to the notchback (Sportback) right up to the B-pillar. It can combine the practical talents of its upper-middle-class body shape with everyday electric mobility: a maximum range of 700 km Recharging a range of 300 km in ten minutes gives cause for confidence.

For those who don’t quite trust new electric vehicles and/or whose usage profile doesn’t fit with an all-electric vehicle, there’s a new A6 Avant with a combustion engine. Then the car is based on a completely different platform than the electric model.