(Motorsport-Total.com) – Charles Leclerc withstood the pressure in the local race and took pole at the Monaco Grand Prix for the second time in a row (the race is on Sunday from 2:45pm in the F1 Live Index). The Ferrari driver set a best time of 1:11.376, relegating his teammates Carlos Sainz and Sergio Perez (Red Bull) to second place.

The decision ultimately caused a mistake by Perez at the start of the tunnel. The Mexican flew from the scene of the Ayrton Senna accident in 1988, and Sainz hit him – after which no one was able to cross the pass. With only half a minute left, it means the end of the session.

Max Verstappen (Red Bull), who had been struggling to keep up with his teammate all weekend, was at a disadvantage this time in the team’s internal duel and had to earn a fourth. Accumulation: 0.290 sec.

Fifth was Lando Norris (McLaren) ahead of George Russell (Mercedes) and Fernando Alonso (Albin), who also crashed at Mirabeau regardless of Perez Sainz’s position. “I just lost focus,” Alonso admits.

Perez was strong all weekend and was considered a starting favourite. Maybe he wanted too much on the last try. Even if he had a different explanation ready: “That last set of tires wasn’t warm enough and was a bit sharp. I almost lost the car in turn.”

“I didn’t have enough grip on the rear tire. I played with gas a bit and then lost control,” he admits, fearing that a gear change might be necessary in light of the race. That could mean a penalty: “The rear doesn’t look good. The fact that I got another kick from Carlos didn’t help either.”

Perez had to go to the medical center for an examination after the accident, thus missing the first few minutes of the mandatory FIA press conference. “I’m fine, though, at 20 grams. Fortunately, there are TecPro hurdles,” he says.

Could Verstappen be in first place?

At least that’s what Red Bull Motorsport consultant Helmut Marko thinks: “Annoying. Max was three-tenths ahead. His weak point was Curve 1. That’s now resolved. He was on par with Leclerc on the last lap,” he said in an interview with ORF “.

This is not entirely true. Verstappen set a new personal best of 18.854 seconds in the first sector of that lap. However, with 18.707 seconds, Leclerc set an all-time new best time in the same division, and thus was on track for the pole regardless of the red flag.

The same aerodynamic forces are at work in Monaco as in Barcelona. So, in theory, “porpoise hunting” shouldn’t be a problem. But the W13’s stiffness meant the car still had a great deal of bounce and was nearly indestructible. Already in Q1 Russell complained: “I have absolutely no grip.” And Hamilton radioed in Q2: “My rear tires are getting hot.”

“The car is still jumping,” says team principal Toto Wolff. But in Monaco it was “different – it’s not that ‘air rebound’ anymore. It’s too stiff and therefore relatively uncontrollable for a driver. You need confidence here. We don’t have that.”

Crash: This is how Leclerc conquered the Pole in Monaco 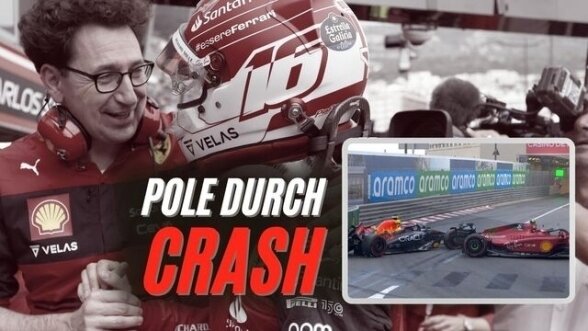 Charles Leclerc (Ferrari) is in pole position, just as in 2021, and just as in 2021, a crash prevented other drivers from being able to improve. For example, Max Verstappen (Red Bull), who, according to Helmut Marko, would have directed the storm to P1. But we also analyze the crucial collision at the entrance to the tunnel, where Ayrton Senna had a legendary accident in 1988. As usual, we look at the Germans on the field, Sebastian Vettel (Aston Martin) and Mick Schumacher (Haas).

In the end, Russell clocked 0.736 and Hamilton shorted 1.184 seconds. This means 6th and 8th place in the playoffs. However, Russell had a decisive advantage: he was able to finish the fast lap at the end of the session, while Hamilton was unable to finish it due to red flags.

Wolff explains: “Lewis was the quickest guy. Then he stopped the lap because we told him, ‘If you have the impression that the tire isn’t ready in the first turn, you just stop.'” That’s what he did, and then he ran toward the red flag.

Yuki Tsunoda (AlphaTauri) surrendered too early at the start of chicane port and hit the interior of the guardrail. Although he was able to get back into the pits with a damaged car, the session was interrupted by a red flag, most likely in order to be able to check the fender. “Race director played it safe,” analyzes “ORF” expert Alexander Wurz.

In retrospect, there was subtle criticism from one driver or another of race director Eduardo Freitas. According to some, he didn’t have to cut the playoffs due to Tsunoda’s position.

Were there victims of this red flag?

yes. Pierre Gasly (AlphaTauri) was one of the secret candidates to start the race in the third row. But because after the break, almost all the drivers lined up at the pit exit and distanced themselves from the car in front and time was running out for the drivers behind, six drivers were no longer able to complete a fast lap. Gasly (17) was one of them, and Guanyu Zhou (20 / Alfa Romeo) was another.

The Haas team also didn’t set the lap time well enough and couldn’t run on time. For Kevin Magnussen (8th in the first quarter) and Mick Schumacher (14th), this did not play a decisive role: they moved into the second quarter, as did Hamilton and Bottas.

How did things go on in Q2?

Both Magnussen (13th place) and Schumacher (15th and last) retired in the middle part of the qualifiers. But Schumacher was closer to his teammate than he had been for a long time and came within 0.160 seconds of Magnussen.

In addition, Yuki Tsunoda (11th / AlphaTauri), Valtteri Bottas (12th / Alfa Romeo) and Daniel Ricciardo (14th / McLaren) were eliminated in the second quarter. “The training accident has put him off track,” Wurz says of Ricciardo. “It somehow just doesn’t fit in with him.”

Tsunoda came 0.109sec behind Alonso (10th in the second quarter).

Where can you watch the race in Monaco on TV?

In Germany exclusively on Sky. The race starts at 3:00 pm. Transmission begins with preliminary reports and exciting interviews at 1:30 p.m. (The show: Get your Sky ticket now and see who wins the Monaco Grand Prix! Best of all, you don’t even need a receiver!)